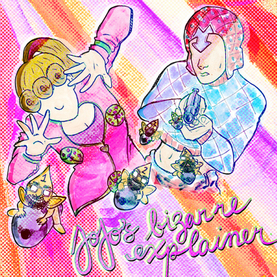 We finally get to talk about the boss' character design. To say we do not like it would be an understatement. Mista invents the concept of Instagram influencers. The boss apparently decided to do an archaeology internship at some point? And discovered a box of discarded arrow heads, like you do? We get to learn what the Stardust Crusaders boys were up to in the 1990s (okay, three of them? not much). Iggy appears in a flashback and we aren't happy about it. And we meet Twink Jotaro who presumably is the result of a Dio-style chimera experiment: the head of a Jotaro on the body of a twink.